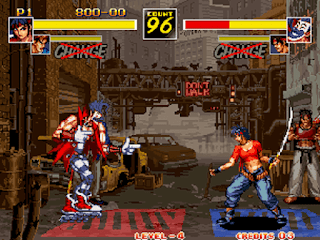 Genre: Action
Perspective: Side view
Gameplay: Arcade, Fighting
Published by: SNK of America
Developed by: SNK Corporation
Released: 1996
Platform: Neo-Geo
The main feature of this fighting game is the game in a team (two players). Here, the outcome of the struggle depends on your joint activities. You can assemble your team by choosing two people out of ten fighters. The portrayal of the characters is impressive. The controls are very convenient and do not slow down the game process. The original command battle system allows you to develop your own tactics during battles. A well-defined background is the decoration of the game.
‹
›
Home
View web version