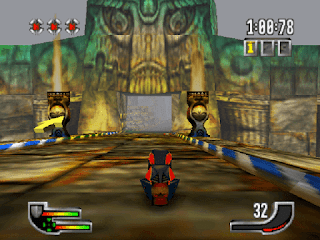 It is a motorcycle racing game, in a futuristic style where the vehicle is fully bodied (indeed, we do not see the driver). We participate in cups that unlock multiplayer circuits as well as more efficient motorcycles.
It had a single player championship, single race and time trial mode. In multiplayer, he had the same possibilities, the most interesting being that of making a two-player championship, but also a combat mode in four arenas provided for this purpose.
‹
›
Home
View web version