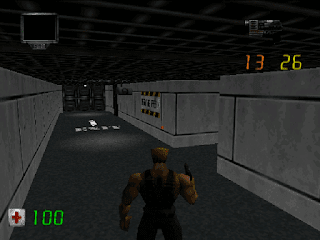 Genre: Action
Perspective: 1st-person, Behind view
Gameplay: Shooter
Interface: Direct control
Setting: Post-apocalyptic, Sci-fi / futuristic
Narrative: Comedy
Published by: GT Interactive Software Corp.
Developed by: Eurocom Developments Ltd
Released: 1999
Platform: Nintendo 64 (N64)
The game begins on a military base when Duke receives a video call from himself from the past. In the past, aliens had conquered the world with the help of various zombies and Duke is fighting from the resistance. From then on, Duke must use the technology of the time and travel through time preventing the aliens from changing historical events in his favor. In this way we go to several important times such as the Wild West, Victorian England, the present time or an apocalyptic future, among which 22 missions will be developed.
To help our hero in his adventure we will have various gadgets, from night vision goggles, or gas masks, to medicine cabinets and steroids. We will also have numerous weapons, which are divided into two groups: Earthlings (pistols, rifles, missile launchers, etc ...), and extraterrestrial weapons (range cannons, freezing rifles, etc ...).
A game in the same saga, Duke Nukem: Time to Kill, presents a very similar story, in which our hero must travel through time and prevent the aliens from changing events in his favor. However, it can be noticed that the gameplay, the design and the environment change remarkably.
‹
›
Home
View web version