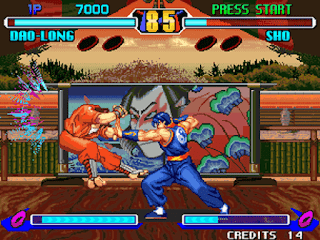 Genre: Action
Perspective: Side view
Visual: 2D scrolling
Art: Anime / manga
Pacing: Real-time
Gameplay: Fighting
Interface: Direct control
Published by: Visco Corporation
Developed by: Visco Corporation
Released: 1998
Platform: Neo-Geo
Breakers Revenge is an updated version of Breakers that was released exclusively for еру Neo-Geo MVS. Introduce a new character named Saizo and make the final boss Bai-Hu a selectable character. Revenge makes adjustments to existing casts of characters and balances the overall game. Even so, the intro is almost identical to the first game and its graphics are similar to those of Breakers; however, the life bar was modified and has a different look compared to the first game, while some graphics of some scenarios were removed (for example the flags of the Sho Kamui stage).
‹
›
Home
View web version