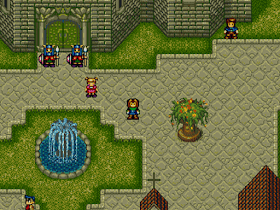 Genre: Role-Playing (RPG)
Perspective: Top-down
Visual: Isometric
Pacing: Turn-based
Setting: Fantasy
Published by: Computer & Entertainment Inc.
Developed by: Computer & Entertainment Inc.
Released: 1996
Platform: SEGA Genesis / Mega Drive
The story of the game is certainly based on Mark Twain's "The Prince and the Pauper", which we all enjoyed reading as children. But in the game, the plot is slightly changed. I think that the creators did not exactly convey the plot of the work of Mark Twain, because they probably did not want to subject the little prince to all the torments that he experienced in the original book. The main character will not have to be beaten by various vagabonds and ragamuffins, he will not have to meet a cannibal, he will not have to see terrible torture in a local prison, and he will not have to be repeatedly rescued by a devoted warrior Miles Рendon. And the plot with the prince of the garbage court - Tom Kenti in the game is not developed at all. The prince himself in the game bears the name Stephen and he does not live in medieval England, which is still drawn out in the "Crusade" wars, but in the fairy-tale world of the kingdom of "Shatt".
Prince Stephen, tired of routine and everyday life, escapes from the castle and meets a beggar with whom he changes places during the day. Not realizing that the evil minister Cat found out his plans, he dreams of looking at the world like an ordinary person, learning with his own eyes about the life of his people. But the evil minister prevents him from returning to the castle like a beggar. Minister Cat, meanwhile, set in motion his insidious plan to turn all the inhabitants of the kingdom into cats. Now Prince Stephen alone must return everything to its place, armed with his tenacity and magic. Who would believe the filthy ragamuffin that he was a prince?
It is quite unusual that the entire game, the entire plot is built on one character, while most jRPGs tend to involve a large number of heroes. However, the entire adventure revolves around one person. From start to finish, you only have to play the prince. But in this seemingly minus one can find a certain freshness and charm: you do not need to dissipate into several characters at once, accumulate experience and items for them, but focus on one character. This made the game a little different during its original release and is leaving now.
All features of Beggar Prince are not like other jRPGs. In addition to the only playable character, there is also no additional magic, no money to be had or used, and only a single piece of specific equipment and weapons. Prince Stephen automatically upgrades whenever he gets a new weapon or armor, so there is no need to tinker with inventory to find the best outfit combination.
In addition to the uniqueness of the game - its combat system. The combat resembles some modern jRPGs such as Grandia. Opponents can surround the hero, and actions are applied on the move. The opponents' life scale is cumulative, combining their stamina.
Regardless of what kind of equipment you detach or what level you are, enemies consistently take away the same amount of damage. You, of course, make it easier to deal with enemies, but it turns out that the new armor that you found does nothing. This is offset by the fact that your healing and magical recovery fixes both incremental increases as you gain levels. That simple loaf of bread that only healed about sixty points is eventually used to recover over two hundred. I guess this is all done to keep the gameplay and inventory as simple as possible, and it actually works pretty well. This is all part of a delicate balance, and magic is no exception. Magic is divided into elements: fire, air, water, earth, light / dark; along with other elements. Gradually, additional attacks appear in the battle menu that can be used, and which increase depending on what equipment is at the moment.
For a game that has passed ten years, Beggar Prince still looks pretty good. Vivid detailed locations, lots of visual effects look great. But the music is not so happy, with the exception of a few urban themes.
The only annoying thing about this game is the frequency of the random battles. As in most similar games, opponents attack while moving around the location. But here the frequency of attacks reaches very short periods of time, and battle follows battle. Therefore, you have to spend more magic and items to replenish your health. Fortunately, raising the level automatically restores vital resources (you can also recover using beds that are scattered all over the place). The developers offer some help with healing fountains in most dungeons, but they usually replenish one thing: either magic or health.
A wide variety of magic and weapons, interesting and varied enemies, many dark dungeons and other locations - all this is combined to give us an original RPG. Super Fighter Team adds an excellent translation to this that allows this game, formally released only for Taiwan, to be playable and understood around the world. Believe me, the text material in this game is very large.
‹
›
Home
View web version