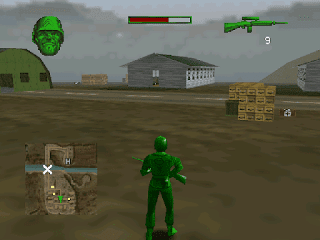 Genre: Action
Perspective: Behind view
Gameplay: Shooter
Published by: 3DO Company
Developed by: 3DO Company
Released: 1999
Platforms: Nintendo 64 (N64), PlayStation (PSX, PS1)
The game is a third person shooter. This is another game in the Army Men series, which is based on the wars of plastic soldiers. The player takes control of the green army sergeant, he will have to fight the general Plastro and the Tan army. The gameplay is basically pretty standard for a 3D third-person shooter. You need to destroy enemies and enemy equipment, collect weapons and various bonuses. Some objects on the map can be destroyed. Minefields are present.
‹
›
Home
View web version