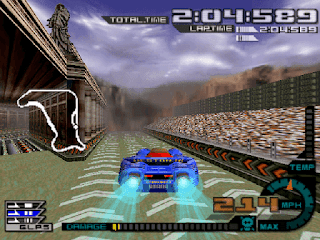 Genre: Action, Racing / driving
Perspective: Behind view
Setting: Sci-fi / futuristic
Published by: ASCII Entertainment Software
Developed by: Locomotive
Released: 1998
Platform: Nintendo 64 (N64)
Aero Gauge takes place in Asia during the year 2065. The game has four tracks and five vehicles from the beginning, with additional tracks and vehicles that can be unlocked through Grandprix and Time Attack modes. The set includes damage to the vehicle, displayed by a gauge on the bottom of the HUD. As the player gains damage, their vehicle will start to sparkle and smoke. If a player takes too much damage, their vehicle will stop, slowly land on the ground, and the screen will fade to black with the text "Remove". To avoid this, players can repair the damage by flying through the spawn screen tracks in low-altitude areas.

The game has four different game modes that the player can choose from from the main menu.

Grandprix is ​​a single player game mode. It has a basic championship league, having the players race against the computer controlled vehicles on every map in the game. Before each race, the player must take two qualifying laps which in turn determines the starting position for the race based on the player's best time and how it compares to that of the computer. The actual race is three laps around the field, against seven opponents, all of whom take off from the starting line quickly, usually leaving the player behind to catch up. After a race, the player receives reward points depending on his final position; better placement gives more points. The points from each race in the Grandprix are totaled to determine the winner.

Singlematch is also a single player mode. It is a race against the artificial intelligence of the game on a track chosen by the player. Like the Grandprix, two qualifying laps are required to determine starting position.

VS mode is a two player game mode, in which two human players choose a track and a race. There are no qualifying laps and there are no AI opponents.

Time Attack mode is another single player game mode. It is a time trial on a track chosen by the player. The player can choose to do three or an infinite number of laps. If the player selects to do three laps, the ghosts (representing the player's best time) can be saved to a memory card and loaded to run.

In the game universe, an AeroMachine is a vehicle with the ability to produce a strong field of localized magnetic flux. AeroMachines are the vehicles used in the Sky Step. There are 10 AeroMachines available, with 5 available up front and 5 being unlockable.
Each of the AeroMachines is classified based on six categories that are displayed on a radar chart. The categories are speed (maximum air speed), steering (ability to turn), accele (acceleration), aero limit (speed necessary to get airborne), shield (resistance) and stability (grip power).

Canyon Rush is the first track in GrandPrix mode, it is 4741m long, with two tunnels that increase speed.

Bikini Island is the second track of the GrandPrix mode, it is 3895m long, with five tunnels, one of them stops along the seabed and you can see a whale right in the middle of the tunnel. They also have places to increase speed.

Chinatown is the third track in GrandPrix mode, in which, at a minimum, you have to be third to proceed to the next circuit. This track can be the most charismatic as it has to speed through Chinese roads and avenues. It is 4684m long and does not have any tunnel to increase speed but it has underground motorway sections.

The Neo Arena is another futuristic GrandPrix mode circuit in which the GrandPrix mode racing championship ends. It has 5743m and consists of two tunnels, some of them serving as a shortcut.