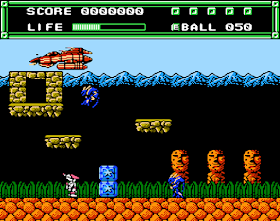 Genre: Action
Perspective: Side view
Visual: 2D scrolling
Gameplay: Arcade, Platform, Shooter
Setting: Fantasy, Sci-fi / futuristic
Published by: Hudson Soft USA
Developed by: Atlus Co.
Released: 1990
Platform: Nintendo (NES)
The post-apocalyptic time has come, the year 2777. All nuclear wars, all natural disasters that have devastated the Earth have passed. Only 5 sparsely populated islands survived and built the unified nation of Xexyz. The nation is ruled by the peaceful king XEU Star. But one day, Xexyz was attacked from the distant corners of the universe by strange evil mechanical monsters. Warrior Apollo can no longer endure the suffering of his people and challenges alien invaders.
Your task is to free all five islands (12 levels in total). The levels have shops, bonus games, residents who will give you hints, items or weapons. There are many types of weapons, as many as eight. Monsters will not be bored! There are also levels where you have to fly instead of jumping on platforms.
‹
›
Home
View web version