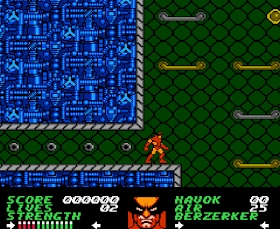 Genre: Action
Perspective: Side view
Visual: 2D scrolling
Gameplay: Platform
Published by: NJN
Developed by: Software Creations Ltd.
Released: 1991
Platform: Nintendo (NES)
An atmospheric game about the legendary mutant Wolverine. Our hero fights evil on a modern technological base, a Mayan temple, a post-apocalyptic world of lava and robots, the lands of the dead, on a huge airship and even under water. Claws (Select) consume vitality, so use them only in dangerous situations. Having gained 100% energy, the character will fall into combat frenzy for a short time, in this state he copes well with enemies, but it is more difficult to control. Often there are secret places on the levels: with prizes or the possibility of early transition to the next level.
‹
›
Home
View web version