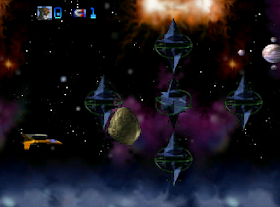 Genre: Action
Perspective: Side view
Visual: 2D scrolling
Gameplay: Arcade, Shooter
Setting: Sci-fi / futuristic
Published by: Atari Corporation
Developed by: Atari Corporation
Released: 1993
Platform: Atari Jaguar
One of the very first games to ship with the Atari Jaguar game console in 1993. The game belongs to the Space shooter genre. And at the time of its release, it was one of the most beautiful games of this genre. We have to take control of the spaceship and plow the vastness of the galaxy, destroying everything that may pose a threat to us. Initially, we can choose one of four missions, one for each of the moons of the planet Cosmolite. But in order to get to the planet itself, and in order to fight the main boss of Odd-It, you must first go through all of them. The game has a huge number of different bonuses and a wide variety of very different weapons, especially a lot of special ones. What is very important, there is humor in the game.

The Crescent Galaxy has been fell. She was captured by an entity known as Odd-It, whose only passion is to make everything as strange as it is. All planets in this galaxy are under his rule and are guarded by a blockade. A corporal at the head of the galaxy's crescent interplanetary defense squad known as the Circle Reserves (whose main armada nearly died), Trevor McFur and his partner Cat Cutter seek to overthrow Odd-it. Trevor McFur and Cutter set their coordinates for the house and are drawn to nine warp threads.
‹
›
Home
View web version