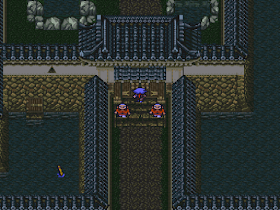 Genre: Role-Playing (RPG)
Perspective: Top-down
Pacing: Turn-based
Gameplay: Shooter
Setting: Fantasy, Sci-fi / futuristic
Published by: Square Co.
Developed by: Square Co.
Released: 1994
Platform: Super Nintendo (SNES)
The uniqueness of the game lies in the fact that we do not go through an integral plot and story, as it happens in ordinary zheerpegeshkas. Here we have 7 completely different stories to choose from, and another one opens after completing these seven, after completing the eighth, all 8 stories are woven together, telling us what was in common in these, at first glance, different stories. These stories are completely different in genre and performance.
The combat system in this game is also atypical for other RPGs of those times. We have a field on which we can move and a set of techniques, which becomes more with an increase in the level of the character, there is no mana here at all, and lives are restored after each battle. But that doesn't mean it will be easy.
For each chapter, there are selected compositions here, for example, in the chapter about the caveman there are primitive motives, in the chapter of the ninja music sounds in the Japanese way, and in the near future, downhole compositions in the style of rock. Only the boss theme is the same everywhere and by the way it is delightful.
Graphics ... The game cannot boast of good graphics. 94 ... This year games were released with much better graphics. In the same year, for example, FF6 was released on the same console, from the same Square. Yes, it can be seen that the developers were either in a hurry with the game or decided to save on graphics. Everything is drawn here simply, no frills. Looks like the graphics in FF4. The same small sprites, all the same small. True, this does not apply to the drawing of battles, because they are drawn perfectly. But you stop paying attention to the graphics as soon as you get involved in the game. In contrast to the bad graphics, there will be excellent music and a high-quality interesting storyline. Let's dwell on it in more detail.

This is the longest chapter in the game. And also the most diverse in terms of enemies and all kinds of traps. Here you will be confronted by ninjas and samurai and wooden dolls and spirits and sorcerers. The action takes place in feudal Japan. We play as a young shinobi Oboru, who was assigned a secret mission to infiltrate enemy territory. And then we have a choice: to fight our way through or go unnoticed. Everyone can go as they want, I personally fought my way through. In the stealth element, we are helped by a kind of invisible cloak, not even a cloak, but something like a camouflage rag. GTA fans will be given the opportunity to kill innocent women and helpless old people. If you go through this chapter and do not kill more than one person, then at the end we will be rewarded, but in this case we will not be able to pump the character. This is definitely an interesting chapter, but too long compared to the others.

China. Have you seen the movie "The Drunken Master" with Jackie Chan? So the action takes place at about the same times as in the film. We are given control over an elderly martial arts master, the owner of which is he alone. The master is old, so in order to pass on his skills, he begins to look for students. And he finds it. In this chapter, you can hunt tigers and teach your students the art of martial arts. The teaching goes like this: you fight with one of the students and after you defeat him, his indicators increase. A sort of reverse sequence. The antagonists here are the students of a large martial school of another kung fu, the head of which committed an unforgivable act ....

This chapter is somewhat different from the others. Her genre is most likely a horror or thriller. Even the music here is peppy, intensifying the atmosphere. The action takes place in the distant future. We're in space on a spaceship. Engineer Kato, out of nothing to do, constructs a robot and calls it a Cube (although the robot itself is egg-shaped). It is for this robot that we have to play. This ship transports a dangerous monster to the ground, which is locked in a cage in the cargo hold. I will say that this is not an action chapter, in fact, there will be only one boss fight in it, except for the passage for Captain Sauare. Captain Sauare is a arcade machine that stands in one of the compartments. It turns out that this is like a game within a game. If our ship's crew could peacefully transport the monster without incident, then the game would not work. After a series of events, the crew systematically begins to destroy one person at a time, in the best traditions of thrillers. Moreover, someone released the monster! People are in a panic, start blaming each other! The robot Cuba will have to find out who brewed all this and punish the villain. I will say that the ending was unexpected for me.

Our days. The young wrestler Masaru wants to become the strongest and for this he needs to defeat six fighters and fight another dishonest kachman. In this chapter, we will not be allowed to pump our character. There are 6 fighters to choose from, we choose someone and go into battle. This chapter is for tactical lovers. You can't just win here. True, what kind of pumping element is still present. We remember the techniques of the enemies who managed to carry them out with the main character. There are many tricks here, but against the seventh fighter (chapter boss), only two are really effective. This chapter reminded me of sports movies like Rocky.

It's rare to see the Wild West theme in Japanese RPGs. Here we play as a cowboy who has to defend the city from a gang of thugs led by a rolling machine gunner. Everything is done very well here in terms of the atmosphere. Cowboy duels, saloons, the silent protagonist is somewhat reminiscent of Clint Eastwood. Everything seems fine, but gosh what did they do with the plot! Oh, these Japanese, they will always throw out some kind of surprise. ... The chapter resembles old westerns, except for the moronic plot.

This is the funniest chapter in the game. We play as Neanderthal Pogo and his monkey. We hunt animals, feud with another tribe and try to win a woman's heart (well, how to win a heart ...). The peculiarity of this chapter lies in the presence of humor and the presentation of the plot. The plot is presented here with the help of pantomime and pictures. I have a suspicion that it is because of this chapter that the game did not pass the strict censorship of the North American and European censors, because there are too many hints of "it" here. But nevertheless, everything is done here with a grain of humor, you will not be bored in this chapter. She reminded me of ... no, not the Flintstones, but rather the French comedy Million BC.

Near future. The world is cyberpunk here. As a child, the protagonist Akira witnesses the murder of his father, who worked in the police. After the endured grief, the guy opens up psychic abilities, he can read minds. We will use this feature in the game. You can talk to someone, and then read his thoughts to find out his true intentions. Here we are confronted by a gang of bikers who wear helmets in the form of skeletons. This chapter has a unique style and interesting plot. Think you just need to beat the skeleton gang? Noooo. It's not that simple. This chapter reminded me of anime girls.

The eighth chapter, which opens after passing the previous seven. Stamped typical JRPG, even the battles here are random as in any FF. The action takes place in a typical fantasy world. Monsters, princesses, sorcerers, a brave ragamuffin protagonist. All this has already been 500 times in other JRPGs. The demon king kidnaps the princess, and therefore you need to save her and punish the villain along the way. Everything seems trite and simple, BUT after you win, you will be surprised. The ending is atypical here! I will not tell you, you better play it yourself. This chapter reminded me of most JRPG games, apart from the plot, or rather the ending.

The final chapter where we have to play all eight characters from the previous chapters. They all gather in one place for a decisive battle. Here we find out what they have in common. Everything falls into place. This chapter has a philosophical background, you have to think a little.
It should also be said that this game has two endings - good and bad. In order to achieve a bad ending, we must defeat the main characters of all chapters in the boss battle. They give us bosses to manage! I have never seen anything like this in any game of those times.
Such is the original game with bad graphics, but with a well-developed plot and great music, was released on the SNES. It can rightfully be called the gem of this console.
Rumors are now circulating that Square Enix may be making a remake of this game on modern consoles. It would be cool. After all, nowadays you rarely see original games.
‹
›
Home
View web version