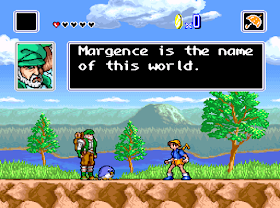 Genre: Action
Perspective: Bird's-eye view, Side view
Visual: 2D scrolling
Art: Anime / manga
Gameplay: Platform
Published by: Naxat Soft
Developed by: Earthly Soft
Released: 1995
Platform: Super Nintendo (SNES)
In this game, we take on the role of a schoolboy living in modern Japan. One fine day, the sky turns dark blue, heavy rain poured down like a bucket, and the boy, halfway to school, finds an umbrella that has fallen from the sky. One fact he doesn't know is that the umbrella is magical! The moment he touches it, the hero is transported to a parallel universe. It seems that an evil creature named Dondera is threatening the country. But is it really so? You have to visit the capital, talk to the emperor and study this issue in detail. The game, in fact, belongs to platformers, but unlike most other representatives of this genre, here you have the opportunity to visit cities where you control the hero in the standard form of all kinds of RPGs. You can go into houses, talk to townspeople. In the platforming levels that are the main part of the game, you will have to switch between the hero, the talking bird Bonto, who accompanies the random guest on this adventure, and the girl Saki, whom we will meet a little later. Each character has individual special abilities and their own ways of fighting. The main hero can soar through the air using an umbrella, Bonto can jump twice on a high ledge, Saki can jump on walls, etc. You can also find various bonuses and items in the game. An interesting product for all lovers of original little-known Japanese games.
‹
›
Home
View web version