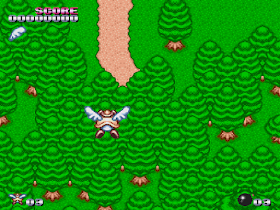 Genre: Action
Perspective: Top-down
Visual: 2D scrolling
Gameplay: Arcade, Shooter
Published by: SOFEL
Developed by: Sting Entertainment
Released: 1992
Platform: Super Nintendo (SNES)
A fun flying shooter with a very funny character who flies across endless spaces and destroys everyone who prevents him from flying carefree. The game is made in the best traditions of Konami Twin Bee on the same system. You can shoot both forward and diagonally (right or left - by pressing R or L together with the shot button), and if you press L and R at the same time, you can shoot down. The shot button can be held constantly. By catching 3 cherry pies, you can upgrade your weapon. In addition to standard bullets, there are steam and lightning bolts. There are also homing "satellites" (the icon looks like a UFO). Each weapon improvement serves as an extension of our health bar: if at the beginning the hero can be killed with one hit, then with the first improvement - from two, and so on. Bombs help to get out of difficult situations, 3 for each life. Difficulty can be changed in the menu, to get there, you need to press Select on the start screen. In the game itself, the Select button will allow you to change the speed of the hero.
‹
›
Home
View web version