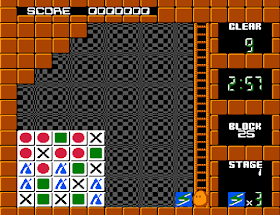 Genre: Puzzle
Perspective: Side view
Visual: Fixed / flip-screen
Pacing: Real-time
Gameplay: Tile matching puzzle
Published by: Taito Corporation
Developed by: Taito Corporation
Released: 1989
Platform: Nintendo (NES)
There are several different types of blocks on the screen with different symbols (squares, circles and crosses), combined in a common heap. We control a small creature that crawls up and down the stairs at the edge of the game screen and throws blocks into this pile. The goal of the game is to throw the block we have and hit it exactly in the same block in the heap that matches the pattern. In this case, both blocks disappear, and the column corresponding to the padded block falls below, and the next block in turn from above (already, most likely, with a different pattern, although it may be the same - it depends on the specific set in the level) arrives at the hero, and it needs to be thrown further into a block similar to it. And so you need to continue to do so until the blocks in the heap are over. Sometimes we come across special blocks that help us get an extra life. It should be noted that the game runs for a while.
It would seem that the game "Flipull: An Exciting Cube Game" has such a simple and uncomplicated gameplay, but ... But it is so attractive! The game has received high marks from critics and players, and according to representatives of "Amiga Power" it deserves 23rd place in the list of the best games of all time. In general, try to play it yourself and see that the game deserves a very high score!
‹
›
Home
View web version