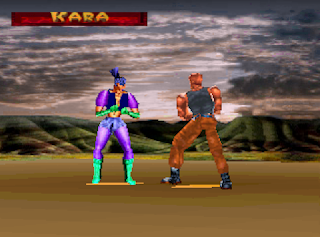 Genre: Action
Perspective: 3rd-person
Gameplay: Fighting
Narrative: Martial arts
Published by: Atari Corporation
Developed by: Atari Corporation
Released: 1996
Platform: Atari Jaguar
Fight For Life is the only 3D fighting game for the Atari Jaguar and the last game to be officially released for this console in 1996. The game was developed as a clone and competitor to the then popular 3D games Virtua Fighter and Tekken. For this, programmer Francois Bertrand from Sega AM2 was hired. He was the only programmer for this game. The first version of the game presented at the exhibition was polygonal, later textures were added so that the game could compete with similar games on other systems. Rumor has it that the game was never completed due to Atari's debt to the game's programmer. The game at that time was unique in that it gave the player almost complete freedom of movement on the battlefield. The player could walk not only forward and backward, but also on the sides, dodging a blow to the side. In the game you choose one of 8 fighters, and you will fight with other fighters for the right to get out of hell and get a new life. The plot is similar to the plot of the game Eternal Champions.
‹
›
Home
View web version