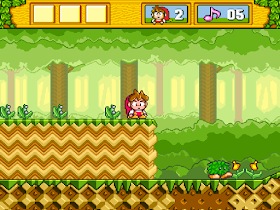 Genre: Action
Perspective: Side view
Art: Anime / manga
Gameplay: Platform
Published by: Hudson Soft Company
Developed by: Hudson Soft Company
Released: 1996
Platform: Super Nintendo (SNES)
The game, of course, is designed for children, but this does not mean that an adult does not want to plunge into this gaiety and carelessness. Great graphics and sound. A cute character who is very interesting to play. The whole implementation looks simple and tasteful. The effects are beautifully drawn, and the enemies are well worked out. Sound data is above average. The protagonist of the game, a boy named Milon, can jump over the heads of enemies and shoot bubbles. His main task is to save the fairy Alice, after she was captured by the demon Amon. The only way to defeat him is to collect five legendary artifacts, on which the demon sent curses and left in the hands of his formidable followers. So, your task, controlling the hero, is to save the life of your friend Alis, defeat Amon and get magical things into your own hands. This game is undeniably worth your time. Playing it is a good way to spend another day and enjoy a great game.