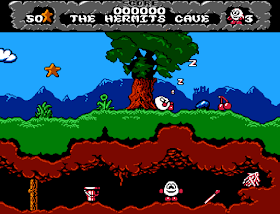 Genre: Action
Gameplay: Platform
Published by: Codemasters Software Company Limited
Developed by: The Big Red Software Company Ltd.
Released: 1993
Platform: Nintendo (NES)
Meet - before us is an unusual hero named Dizzy. Dizzy is an egg and he has a girlfriend named Daisy. One day, they discovered a secret entrance to the castle of the evil wizard Zach. Unbeknownst to them, Zak himself was watching them through the magic crystal. And the villain set a trap for them in the form of a terrible ... spinning wheel! Curious Daisy touched her and pricked her finger, and then immediately collapsed to the floor. Dizzy was very scared, and then completely panicked when he heard the door open behind him. Turning around, he saw a troll grabbing his girlfriend. Now Dizzy must by all means save Daisy in order to make his egg love for her even sweeter.
The iconic egg in the history of the gaming industry meets us with a good game on the NES, made in the quest genre. The passage will give many pleasant moments and humorous scenes. Of course, the game is also not deprived of flaws. As for me, any self-respecting gamer should definitely get to know the charismatic Dizzy. Although he is not cool, but a cute enough creature.
‹
›
Home
View web version