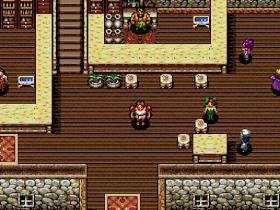 Genre: Action, Role-Playing (RPG)
Perspective: Top-down
Gameplay: Puzzle elements
Setting: Fantasy
Published by: Enix America Corporation
Developed by: Produce Co.
Released: 1994
Platform: Super Nintendo (SNES)
Previously, your ancestors were friends with dragons, but after the great battle with demons, dragons have become a rarity. The hero finds or buys weapons and armor, as well as fairies and magic amulets. It is interesting that elderly women sell amulets (for a dialogue of trade, it is imperative to contact through the counter). Fairies are great help, especially the Fury Fairy and the Cure Fairy. Of the weapons, one can note a mace that throws back the enemy and an ax that breaks stones. In addition to wandering through plots and mazes, you have to solve problems and jump on platforms. In front of the door to the Flood Gate Room, you need to get up and press the X button several times. In the Platinum Palace, orientation in dark halls will help some types of magic.
‹
›
Home
View web version