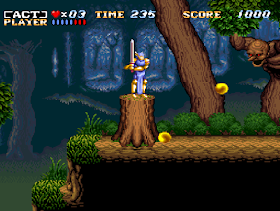 Genre: Action, Strategy / tactics
Perspective: Bird's-eye view, Side view
Visual: 2D scrolling
Gameplay: Platform, RPG elements
Setting: Fantasy
Published by: Enix America Corporation
Developed by: Quintet Co.
Released: 1991
Platform: Super Nintendo (SNES)
During the game, you play the role of a very powerful creature, awakened from a long sleep. During awakening, you find the civilizations of your former world in decline, and now you, as a deity, will have to return faith to the hearts of people again. The game combines two directions - the genre of action and the genre of urban modeling. In the first case, your character descends from the sky and lives in the body of an ancient statue. The lifeless statue turns into a powerful warrior of the human form, which knows how to wield a sword. Thanks to these skills, you will have to wade through numerous dangerous monsters and overcome all sorts of other various dangers. At the end of each stage, by itself, a more powerful creature is waiting for you, so the game provides for a help and a system of magic spells. After the victory, you, as a deity, open a new section and a new view of the world. Urban Modeling Mode involves protecting and guiding an accessible civilization and putting it on the path to prosperity. In this part of the game, you need to apply measures that stimulate population growth. For example, such as teaching people, building roads, farms, houses, etc. A servant, an angel, or Cupid, as he was called in ancient mythology, is given to help you, who controls all actions and informs you, as a Master, about all unforeseen cases. In addition, you, as a Master, have the opportunity for miraculous messages, such as the ability to cause lightning, rain, sunlight, wind, and even earthquakes. These miracles are provided for such obvious obstacles and phenomena as rockfall, volcanic eruption, snowfall and, of course, the destruction of monsters intending to stop the prosperity of your mortals. Also, these miracles can be applied in less global cases. For example, calling the wind for better performance of windmills, etc.
‹
›
Home
View web version