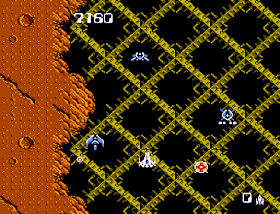 Genre: Action
Perspective: Top-down
Visual: 2D scrolling
Gameplay: Shooter
Published by: FCI
Developed by: Compile
Released: 1987
Platform: Nintendo (NES)
The whole plot revolves around a certain The System created several millennia ago by an unknown alien race. This "System" contained boundless knowledge, age-old wisdom and enormous destructive power. When people tried to access the System database, something went wrong. As a result, the alien creation turned into a weapon of mass destruction, destroying all living things in its path. The AFX-6502 Zanac space fighter was sent to fight the raging "System", which you will have to control over 12 levels.
Enemies in the game are varied, from simple meteors and rockets, to homing charges and cunning structures that shoot in all directions at the same time. Bosses here represent various ground structures that must be destroyed in a certain time. The game has the ability to accumulate over 100 lives! But it's not so easy to do this, the ship dies after the very first injury or collision with the enemy. Only an excellent reaction, or a protective field, if you manage to pick it up, will save you from inevitable death. There are more than enough weapons in the game, and each type of it can be pumped as much as possible by collecting bonuses with the corresponding numbers (a total of 8 types of weapons).
Graphics, sound and music are at a decent level. Recommended for all fans of flying shooters, and those who are not afraid of the complexity of the game.
‹
›
Home
View web version