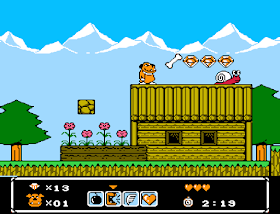 Genre: Action
Perspective: Side view
Visual: 2D scrolling
Gameplay: Platform
Published by: Atlus Software Inc.
Developed by: Atlus Co.
Released: 1992
Platform: Nintendo (NES)
"Wacky Races" is a standard platformer game in which we play the role of the dog Muttley, who must help his master Dick Dastardly with different problems (each level has its own storyline). But the passage itself at all levels does not change. The plot of the game is non-linear, we can choose one of 3 levels. In each of the levels there are 3 stages (in the third stage there are four of them), and in each stage there are 2 locations, and in each last location a boss is waiting for you. The boss has 2 stages of difficulty: when he is kind and hardly shoots at us, and also when he is furious (the tactics of passing in this case changes dramatically).
Overall, the game is very fun, but like most other linear platformers, it sorely lacks the replay factor. After all, after you pass it, it will not be so interesting to start the cartridge again. The game is simple and passes very quickly, there are not even any special secrets in it to give the player additional interest and keep him in front of the TV for more than one playthrough.
The gameplay in "Wacky Races" is pretty good but, again, only during the first playthrough. Overall, the game is definitely above average, and the first playthrough will be great.
‹
›
Home
View web version