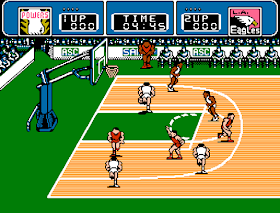 Genre: Sports
Perspective: Behind view, Bird's-eye view
Visual: 2D scrolling
Sport: Basketball
Published by: American Sammy Corporation
Developed by: Aicom Corporation
Released: 1990
Platform: Nintendo (NES)
An excellent basketball simulator. A large selection of teams, although the names are slightly different from the real ones. Each athlete has his own strengths and weaknesses: some are more enduring, and some run faster. Players can be changed by actively pressing the buttons when a member of your team goes to the barrier. In jumps at the ring and 3-point throws from the lines, the camera zooms in and we see close-ups. Between the halves, you will find the dance of the girls from the cheerleading group. As in big sport, there are violations in the game, for example, passing to your own half from the opponent's territory or pushing by members of the opposing team. When there are 4 violations, the injured team makes two free throws for the fifth.
‹
›
Home
View web version