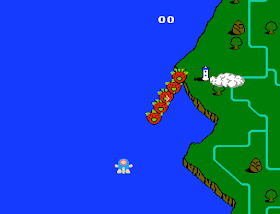 Genre: Action
Perspective: Top-down
Visual: 2D scrolling
Art: Anime / manga
Gameplay: Arcade, Shooter
Vehicular: Flight / aviation
Setting: Sci-fi / futuristic
Published by: Konami Industry Co.
Developed by: Konami Industry Co.
Released: 1986
Platforms: Nintendo (NES), TurboGrafx-16 (TG-16)
The first in a series of robot games from Konami. The background is as follows: in 2801, the peacefully existing island of Donburi was attacked by unknown evil forces led by the Spice King. He stole five diamonds from local residents, and put four of his generals to rule the territory. Some scientist Dr. Cinnamon, who lived on the outskirts of the island, created three humanoid robotic planes (the first part talks about two) - WinBee, GwinBee and TwinBee. You play as TwinBee (the second player for WinBee).
The goal of the game is to finish off all the bosses and stay alive at the same time. The game has many bonuses that are scattered across five levels. The game is quite bright, dynamic, which is not surprising, because the developer is Konami.
‹
›
Home
View web version