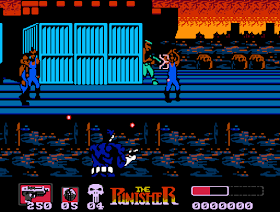 Genre: Action
Perspective: Behind view
Visual: 2D scrolling
Gameplay: Rail shooter
Published by: LJN
Developed by: Beam Software Pty.
Released: 1990
Platforms: Nintendo (NES)
A game about the famous punisher from Marvel comics. Our hero Punisher decided to take revenge by exterminating the criminal element. The graphics are passable, there is no music in most of the scenes, it is replaced here by the sound from the bullets. The gameplay is presented as follows: third-person view, the screen scrolls from left to right. It is necessary to shoot the infantrymen, if necessary, dodging enemy bullets to the sides. From time to time, helicopters and other military equipment appear. Bonuses often fall from the sky - lives, ammunition. Quite an entertaining game with decent difficulty.
‹
›
Home
View web version