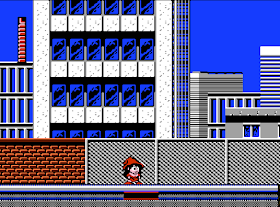 Genre: Action
Perspective: Side view
Visual: 2D scrolling
Gameplay: Platform
Setting: Sci-fi / futuristic
Published by: Vic Tokai
Developed by: Vic Tokai Corporation
Released: 1991
Platform: Nintendo (NES)
A game about a young witch killing enemies with a magic wand. The gameplay resembles Mega Man: there is a regular shot, there is a charged shot, as well as special attacks that you can choose. Like the famous robot, the sprite color changes in the witch when using the additional weapon. In addition to all the skills, the witch can shoot up and duck. The Japanese version of the game is called Magical Kids Doropie, it is lighter than the American one, and there are cutscenes between the levels.
‹
›
Home
View web version