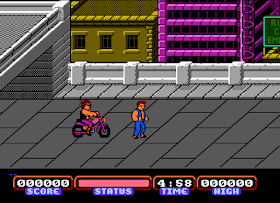 Genre: Action
Perspective: Side view
Visual: 2D scrolling
Gameplay: Beat 'em up
Published by: Taito America Corporation
Developed by: Ocean Software Ltd.
Released: 1990
Platform: Nintendo (NES)
Continuation of the first part of the Renegade game. You're the same kid, Renegade, and you're taking revenge on thief in law Mr. Big because he captured your brother Mett. Mr. Big has great opportunities and sends an army of hooligans, street fighters against you. Let's go free brother!
Initially, you only fight with your hands, but then you can find weapons that make the game easier - baseball bats, dumpsters, etc. There are kicking and punching on A and B, to perform a jump kick, press the kick + up + right / left. There is also a sweep (down + kick) and a head kick (double tap to the right or left). The amount of health that will be restored to you at the end of the stage will depend on the speed of passage. The most versatile technique is the sweep. The bosses hit painfully, so after hitting, immediately retreat. If you get lost, there is a line of advice below.
‹
›
Home
View web version