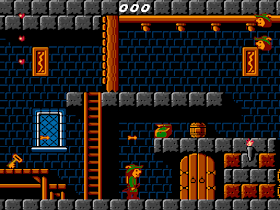 Genre: Action
Perspective: Side view
Gameplay: Platform
Interface: Direct control
Setting: Fantasy
Published by: Camerica
Developed by: Codemasters
Released: 1993
Platform: Nintendo (NES)
The Adventures of the Famous Robin Hood. Your task is to return all the acquired jewelry stolen from the villagers (well, you can not only them). And to roam about in search of these rare things from the peasants will have to go to Nottingham Castle. But not everything is as simple as it seems at first glance - gargoyles, vampires, evil gnomes, fanged spiders and other creatures will get in your way under your feet. Note that treasures can be hidden!
The game was released on Amstrad CPC, ZX Spectrum, Commodore 64, Atari ST, Amiga, NES. Of course, the NES version is strikingly different from the original source (the Amstrad CPC version), but the meaning is the same. Also included in Camerica's collection of games for the NES - Quattro Adventure.
‹
›
Home
View web version