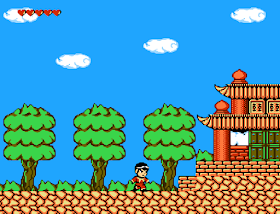 Genre: Action
Perspective: Side view
Visual: 2D scrolling
Gameplay: Platform
Published by: Jaleco Ltd.
Developed by: Nihon Micom Kaihatsu
Released: 1988
Platform: Nintendo (NES)
A game about the famous hero of the Chinese epic Monkey King Sun-Wukong. Bandai has skillfully ported the arcade game Wonder Boy in Monster Land, remaking it for a Chinese legend. Our Monkey King sets out on the road to return 10 statues stolen from the temple. Snakes, ninjas and other enemies appear on his way. Destroying enemies, you pick up money for which you can take weapons and items in any store (of which there are many on your way). A warrior's health is marked with hearts in the upper left of the screen. At the beginning of the game, you have no weapons and uniforms at all, you need to buy everything. The graphics and sound are pretty good.
‹
›
Home
View web version