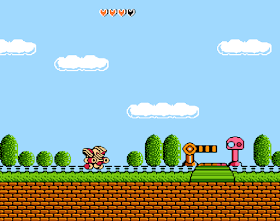 Genre: Action
Perspective: Side view
Visual: 2D scrolling
Gameplay: Platform
Published by: Taito
Developed by: IGS
Released: 1991
Platform: Nintendo (NES)
In this game you control an agile robot on wheels armed with a powerful cannon. At high speed, you need to rush along the level, bypassing the abyss and shooting enemy equipment. You can pick up improvements and pump your weapons, as well as increase vitality. We reach the end of the level, deal with the boss - and our robot is transformed into a shuttle or a submarine. Here the race ends, and a good shoot'em up begins. The screen scrolls to the right, and you need to carefully shoot enemies on the way, preventing them from attacking. The graphics in the game are bright, cartoonish, all enemy mechanisms have eyes and mouths, like cartoon characters. A fun platformer for all ages.
‹
›
Home
View web version