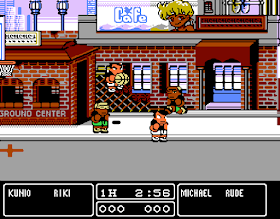 Genre: Action, Sports
Perspective: Side view
Art: Anime / manga
Gameplay: Arcade, Fighting
Sport: Basketball
Published by: Technos Japan Corp.
Developed by: Technos Japan Corp.
Released: 1993
Platform: Nintendo (NES)
Street basketball without rules. Fight as much as you want, each team has its own set of fighting techniques: from simple punches or head strikes to powerful knee strikes from a jump and crazy spinning wheels with a kolobok, and some even use chains and flammable explosive mixtures. You can also hit your opponent with a cobblestone lying on the field, a box, a ladder, or put a trash can on his head. There are three baskets on each side, sometimes they come off and can be attached to an opponent. In addition to the usual throws of the ball, there are slam-dunks and super throws, when the ball turns into some kind of rocket or kettlebell and, in addition to striving into the ring, blows everyone in its path. The stats of fighter players can be improved with gifts from opponents you defeated. The fields have their own characteristics: in Texas, you can be hacked by a horse with its hooves, thereby hooking you higher to the upper ring, in Hawaii you can climb palm trees, and in Las Vegas there is a chance to cut the jackpot by adding extra points for yourself. A very elaborate game full of possibilities and variety. We can say that Technos does not just keep a high level, but raises it to a higher level. And it is not surprising, because this is her last game on the legendary 8-bit console.
‹
›
Home
View web version