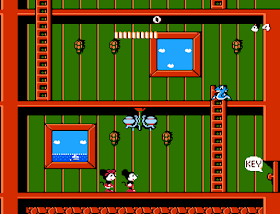 Genre: Action
Perspective: Side view
Visual: 2D scrolling
Gameplay: Arcade, Platform
Published by: Capcom U.S.A.
Developed by: Hudson Soft Company
Released: 1988
Platform: Nintendo (NES)
A funny creation by Hudson Soft about Mickey Mouse and his girlfriend Minnie. Mice travel to fabulous places, familiar to us from "Alice in Wonderland" and "Peter Pan". You play as Mickey Mouse, and Minnie, controlled by a computer, follows you (it's good that the enemies do not beat her). At the beginning of the game, you need to find a weapon for Mickey himself and for Minnie, and then boldly beat the enemies. The bosses in the Japanese version are characters from Disney's "Alice" along with James Hook. In the American version, there will be other Disney characters instead. The gameplay is far from perfect - often the enemies attack in such a way that it is impossible to avoid their attacks. Still, Hudson's piece is fun to play.
‹
›
Home
View web version