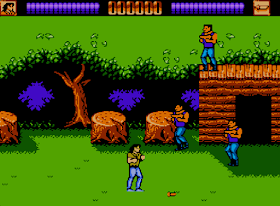 Genre: Action
Perspective: Side view
Visual: 2D scrolling
Gameplay: Beat 'em up
Published by: Ocean of America
Developed by: Eurocom Developments Ltd
Released: 1993
Platform: Nintendo (NES)
The game was made based on the film "Lethal Weapon". In it you have to fight crime. You can play as police officer Martin Riggs, or as his partner Roger Murtaugh. To change the hero, you need to go to the left side of the screen. You can beat enemies hand-to-hand, in a jump, and also shoot at them with a pistol. Throughout the game, you will have to rescue hostages and defuse bombs more than once (to do this, hit the bomb when the light on it is on). When you change characters, the health of the second hero is restored to 8 units. The game has good graphics and good music.
‹
›
Home
View web version