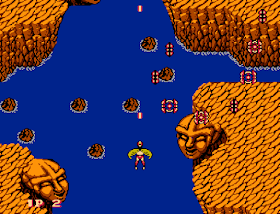 Genre: Action
Perspective: Side view, Top-down
Gameplay: Arcade, Shooter
Published by: Capcom U.S.A.
Developed by: Capcom Co.
Released: 1988
Platform: Nintendo (NES)
A flying game with a very interesting concept. It takes place in a fictional pseudo-antique world. We rule a great warrior who has been granted wings by the gods. You need to defeat a crazy supercomputer that wants to destroy humanity. Well, first you have to properly fly through the levels, shooting numerous assistants of the crazy machine. Everything is in the best traditions of the genre: dodging enemies, picking up power-ups, improving weapons.
‹
›
Home
View web version