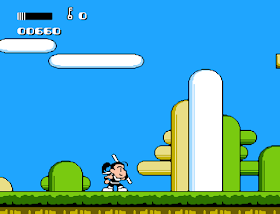 Genre: Action
Perspective: Side view
Visual: 2D scrolling
Gameplay: Platform
Published by: Irem Corp.
Developed by: Khaos
Released: 1993
Platform: Nintendo (NES)
The third part of the adventures of a young ninja, released only in Japan. Graphics and music have become even better since the first two parts, the gameplay is more varied. Again the hero has to save his girlfriend from captivity. This time he wields a combat staff. The arsenal of techniques is amazing: you can not just hit enemies with a stick, but also, leaning against a wall, smoothly slide along it; push off the wall, jump onto enemies from above. There is a slide (down + jump). Having collected 20 seeds at the level, you get into the prize stage. You need to burst three balls in the following sequence: red-gray-white (1 life), white-red-gray (+ 50% defense) or gray-white-red (+ 50% attack). The game is not easy - the sequels are limited.
‹
›
Home
View web version