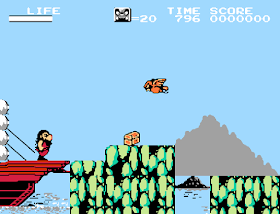 Genre: Action
Perspective: Side view
Visual: 2D scrolling
Gameplay: Platform
Published by: Konami Industry Co.
Developed by: Konami Industry Co.
Released: 1987
Platform: Nintendo (NES)
The events in this manga take place in 720 - 750 AD. n. e. A one-eyed and one-armed man named Gaou is a follower of Saruta (a character who methodically, in different eras, appears as a follower or ancestor, constantly experiencing cruel trials that fall on his bitter lot). After Gaou was expelled from the village, he turned into a ruthless bandit and murderer. On his way, he meets the sculptor Akanemaru and wounds him in the right arm, after which their paths diverge, but later fate brings them together again. Akanemaru, obsessed with the idea of catching the Firebird, turns into a half-mad person, and Gaou becomes the object of persecution and humiliation, while achieving spiritual perfection. Bird Hoo is the most popular part of the entire Phoenix manga series.
In "Hi no Tori: Gaou no Bouken" we play as a gangster Gaou, who lost an arm and an eye as a child (for which he was constantly despised by his peers). Since then, he has resorted to various tactics, not least even to murder, in order to survive in this ruthless world. And then one day he met a monk, who invited him to change his life and start modeling, developing his natural talent in this direction.
Purpose of the game: Help Gaou find 16 pieces of the painting, which, when folded into one piece, will reveal the true appearance of the Firebird. The game takes place in 16 levels (the hero receives one map image after successfully completing each level), which develop in three territories, described for the most part in other volumes of the series. Half of the game's levels will develop in Gaou's own courtyard in feudal Japan (circa 720-752 AD), five levels in the future, and three levels in prehistoric times. Some levels, when completed, will lead us to the next levels behind them, while others (usually located in other times) can only be reached through secret portals. Gaou deals with enemies with the help of his trusty chisel. Also, this tool can be used to make improvised platforms and climb into hard-to-reach places. The game ends in two cases: either when the hero's three lives end, or when Gaou successfully assembles all the pieces into a single picture. I wish everyone to finish the game according to the second scenario.
‹
›
Home
View web version