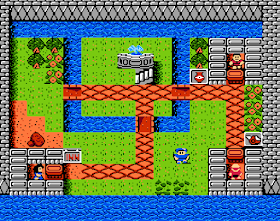 Genre: Action
Perspective: Side view, Top-down
Visual: 2D scrolling
Gameplay: Shooter
Published by: Sigma Enterprises
Developed by: Make Software
Released: 1991
Platform: Nintendo (NES)
The distant realm of "World of Funny" has fallen on hard times: the powerful Dimensional Stone, which is necessary to maintain balance in the local world, has been stolen. The king is looking for a chosen one who could bring him back and reign peace in the souls of all the inhabitants of the country. And there is such a person! His name is Mark, he is a simple pilot "Fuzzical Fighter" (aircraft with a mechanical tail at the end).
The main gameplay involves flying a "Fuzzical Fighter" in side-scrolling levels. As in the standard shmap, here we will have to shoot at numerous enemies, as well as resort to using magic. At the end of each level, you will need to defeat the boss. By eliminating enemies in this part of the game, we earn gold.
Between the main scrolling levels, Mark visits cities, where he can replenish his arsenal of weapons and items (as well as upgrade the aircraft by purchasing, for example, a new engine or shield), which can be purchased from local shops for gold. Throughout the game in the levels-cities, we can independently choose the next step: return to the previous level, relax in the hotel (replenishing health), or go to the next, not yet studied, level. Three different healing spells are available to the protagonist: Riken (minor healing), Rikento (normal healing), and Rikentaru (significant health replenishment). Despite the fact that "Fuzzical Fighter" is a mechanical object, not a living creature, it has a magical scale that can also be restored in cities.
There are 8 kingdoms in the game, each of which consists of an urban RPG part and a scrolling combat part. The game uses a password system.
The graphics in the game are very good, especially in the shmapy levels, where there are often a lot of enemies on the screen, but the game does not slow down at all, and there are no flickers. The bosses are very large (sometimes they take up to 25% of the game screen) and beautiful, just like all the smaller characters. On the other hand, the cities are much weaker: here everything fits on one screen and there are only a few simple characters. Although, this is not a minus, since most of the game time will have to be spent in scrolling combat levels. The only obvious drawback of the game is the implementation of a password saving system. The code consists of only 4 digits, so it is not the current state of our progress with all the achievements and upgrades that is saved, but only the level number. When you enter the password, you will find yourself in the city where you finished playing last time, with a certain amount of money, enough to buy only one or two spare parts for the aircraft. Otherwise, "Fuzzical Fighter" is very good - you should like it.
‹
›
Home
View web version