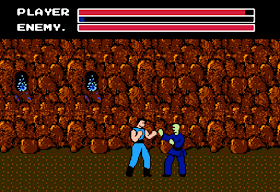 Genre: Action
Perspective: Side view
Gameplay: Arcade, Fighting
Narrative: Martial arts
Published by: Toei Animation Co.
Developed by: Toei Animation Co.
Released: 1988
Platform: Nintendo (NES)
Battle tournament. You play as a warrior in a blue robe who pounds a bald, thin old man in a blue suit. It is quite difficult to deliver blows, besides, after a blow, it is best to quickly bounce back so as not to get back. The game is quite difficult, but interesting. The background graphics are well drawn, but the warriors seem to be drawn and decorated with a felt-tip pen. The animation of the characters is commendable. On "back" + "up", you can roll back. To defeat the leader, you must use a fireball. To do this, firstly, the blue scale must be filled (it fills up when you take damage and is saved between rounds), secondly, perform the "down" maneuver, then "up" + "back", and upon landing, press B (punch button).