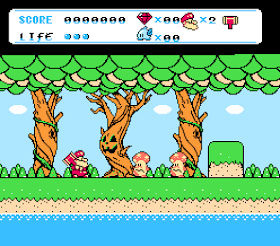 Genre: Action
Perspective: Side view
Visual: 2D scrolling
Gameplay: Platform
Published by: Taito Corporation
Developed by: Taito Corporation
Released: 1992
Platform: Nintendo (NES)
A disaster struck in the fairy kingdom - the villain bewitched the prince, turning him into a frog. Our hero - a bearded gnome with a hammer - will have to collect the ingredients for the potion to help the prince become a man again. Unlike the first part of the game (single-screen arcade), the second part is already a full-fledged platformer. We move through the colorful levels, hammer enemies with a hammer. A stunned monster can be picked up and thrown into another enemy or into a wall, and you get useful prizes. There are riddles on the levels, sometimes not at all obvious. The game was released only in Japan, we knew it as the Chinese hack Super Mario 8. Very cool graphics, and an interesting structure of the stages. The last level with the clock is very memorable.
‹
›
Home
View web version