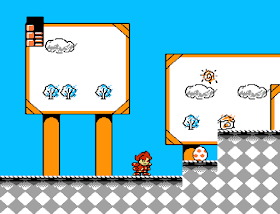 Genre: Action
Perspective: Side view
Visual: 2D scrolling
Gameplay: Platform, RPG elements
Interface: Direct control
Published by: Sur de Wave
Developed by: Takeru Co.
Released: 1991
Platform: Nintendo (NES)
It feels like the game's developers are very fond of the Mega Man series, but feel that these more famous companies have not reached their full potential. "Takeru" has already made a rather decent clone of Mega Men called "Seirei Densetsu Lickle", also known in North America as "Little Samson" (the English version of this game is one of the rarest official cartridges for the NES).
There are quite a few interesting gameplay features in Cocoron. Not only can we pick up enemies' weapons, we have been given the freedom to create our own hero (literally, build him brick by brick). We can, for example, attach the Gundam's head to the Astro Boy's body and arm this hero with a shuriken (in other words, ninja "stars"); or stick a smiling face on a tank and arm this "miracle" with a boomerang; or create a Godzilla ninja who can throw deadly balls.
In total there is:
1. Eight types of heads. Hero, Ninja, Robot, Alien, Fighter, Monster, Ghost, and a question mark (underneath is a smiling face, a clown face, and a pumpkin head), each with three performances;
2. Eight body types. Armor, Wing, Jet, Cyborg, Boat, Buggy, Tank and another question mark (includes cloud and spring);
3. Eight types of weapons. Parasol, Boomerang, Shuriken, Baseball, Pencil, Crystal, Flower, and Musical Notes. Our choice is determined by the number of skills, speed, and, of course, their inherent abilities. The adventures in the game begin with the creation of one of these heroes, and after each battle with the boss, you can make a new character. As soon as we are killed, you can either use the existing hero again, or create a new hero and send him into battle.
The level design is pretty unique, but to be honest, it looks very confusing. Before starting, we are shown a map with the ability to select a specific level, but we do not have the ability to directly select the desired level. Instead, each "level" consists of an entry section and an exit section, with a boss in the middle. After eliminating the boss, we are directed to the exit section, and then the entrance section of the currently selected level will follow. Sometimes extra sections will come across, depending on the relative position of places on the map. Sometimes you will go through the stages in the opposite direction. This is all quite confusing, especially if we want to get a complete understanding of exactly what levels we go through, but at the same time, it gives an unexpected feeling from the game world, not at all like in many other games with a clear and understandable level scheme. So, when we go through the entire map several times and destroy all the bosses, we will get to the last level, which (like the more famous Wily castle), consists of several linear stages, having overcome which, we will finally get to the final boss.
As a clone of Mega Man, Cocoron is definitely a more competent game. Even some of the music themes and sounds are suspiciously similar to Capcom's, and they are also slightly unbalanced. Our hero starts with a very weak weapon, but by killing enemies and breaking the eggs that remain after them, he can eventually take on completely new forms. The accumulated bonuses do not disappear, so after one or two levels you can fully equip yourself to the point where there is simply nothing to throw out. In addition, health bonuses are quite common in levels. All of the above facts of the game, in theory, should have given the impression of it as a rather mediocre product, but "Cocoron" is such a strange game that in the end all those "misunderstandings" do not matter in the general perception of the game.
The levels do not have any real unifying theme, except that they are levels of the same game (jungle, castle, underwater level, milk level, level with desserts, and so on), and they are filled with very motley enemies: penguins, armadillos, fairies, elephants, moons, a dragon (who for some reason captured Santa Claus), there is also a king of cards, throwing cards from the deck at us. It's all hard to imagine, but believe me, the game quite harmoniously combines all this mess. And she takes us back to childhood, to a box of toys, when the most stupid scenarios were quite real for us, and we came up with them at least 100 a day. The only character that is clearly missing in the game is the Barbie doll.
‹
›
Home
View web version