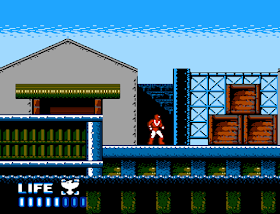 Genre: Action
Perspective: Side view
Visual: 2D scrolling
Gameplay: Fighting, Shooter
Published by: Angel
Developed by: Natsume Co.
Released: 1991
Platform: Nintendo (NES)
The game is an arcade platformer where we have to take on the role of one of the Jetman and resist the forces of the Vyram. Before starting each level, you can choose the most suitable Jetman (out of five available), each of which has its own unique weapon and specific power:
The first five levels (areas A to E) can be completed in any order, while the sixth and final stages (area F) only become available after you have completed levels A-E. Each level is characterized by scrolling horizontal platform gameplay, you need to fight your way to the end of the level and defeat the boss waiting for you. Each jetman knows how to attack in three ways: with a weapon, a blow and a special attack that destroys all enemies within the screen, but can be used only once (or immediately after replenishment). The battles with bosses take place one-on-one, from our side there is a robot Jetman "Great Icarus", and from the side of the enemy - various giant monsters (all of them are the heroes of the show of the same name). The main character has a force sensor, which has four levels, it gradually fills up during the battle, and each current level of the sensor corresponds to one of four possible special attacks.
The game has four difficulty levels, a password save system and a Battle Mode, in which you can practice fighting against any of the first five bosses.
The graphics in the game are pretty decent for the NES platform, and you can always tell which part of the planet you are in right now. But it's bad that there are no backgrounds during the fight with bosses (oh, if the fight between them was going on, for example, against the background of skyscrapers - that would be great!). The animation is great. The graphical component will give you very strong arguments "for" if you think about wasting your time playing the game. The sound effects do not stand out in any way, but the music is good here - it is quite simple, but very enjoyable!