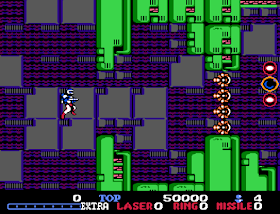 Genre: Action
Perspective: Side view, Top-down
Visual: 2D scrolling
Gameplay: Shooter
Setting: Sci-fi / futuristic
Published by: Taxan USA Corp.
Developed by: KID Corp.
Released: 1990
Platform: Nintendo (NES)
Burai are a race of extraterrestrials with a superbrain who are going to take over the world with the help of semi-organic mutant robots. We need to prevent this. So, we put on our service jet-pack and - go ahead, save our world!
The main feature of this striking hurricane scrolling shooter is the ability to shoot in eight directions (in all directions and diagonals). Enemies also have a habit of attacking from all sides, so the aforementioned feature will come in very handy when passing through.
The game is quite difficult, but still the level of difficulty is more bearable than, for example, in some products of the famous "Rare". Audiovisual aspects are normal. The game deserves a high rating, especially when compared to the few representatives of its genre.
‹
›
Home
View web version