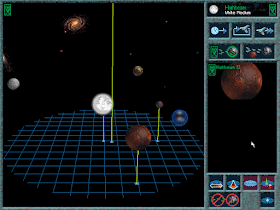 Genre: Strategy / tactics
Gameplay: 4X
Setting: Sci-fi / futuristic
Published by: Logic Factory
Developed by: Logic Factory
Released: 1995
Platform: DOS
Global space strategy, in many ways similar to Master of Orion. The main advantage of the game is the interesting implementation of the technology tree, and the main disadvantage is the phlegmatic AI, which does not even try to defend its planets from your aggression.
The game features twenty-one races, each of which has its own unique ability. There are no people in this zoo.
The galaxy map is three-dimensional, which gives a touch of realism to everything that happens. But sometimes this interferes with orientation, since it will not work simply to travel from star to star - you have to move only along the star paths, and to understand which star this or that path leads to is sometimes quite difficult in three-dimensional space.
A game for fans of the genre who have had time to get fed up with playing Master of Orion and want new sensations, albeit not always equally pleasant.
‹
›
Home
View web version