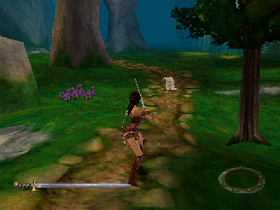 Genre: Action
Perspective: Behind view
Setting: Fantasy
Published by: Electronic Arts
Developed by: Universal Digital Arts
Released: 1999
Platform: PlayStation (PSX, PS1)
The heroine in the game is the great warrior Xena, as usual she is fighting the dark forces that have kidnapped her faithful assistant Gabrielle. The game has 21 levels, in each level you will find fights with mystical, or rather mythical, monsters. Graphics and sound at the level. The disadvantage of the game can be called its straightforwardness, you cannot lead your own adventure. If the adventure had several paths of development, then she could compete with Lara Croft herself. Xena can receive prize karma points for saving prisoners and for not killing unnecessarily. You have the ability to sneak up on opponents from behind and stun them with a blow to the head with a sword. If you are merciful enough, your karma indicator will rise and a soft golden glow will appear over Xena's head. During this period, you can strike with double power. The scrolls contain hints and tips. As a rule, they are located in easily accessible places. Blue Elixirs increase Xena's health if she is injured. Finding the Resurrection Stone provides you with another try at this level if you are killed. As you progress through the game, you will be able to pick up four upgrades for the sword. Each of them, for the rest of the game, provides more effective damage that Xena inflicts on opponents with a sword. You can also pick up four armor upgrades. Overall, this is a good game and you will love it.

Codes must be entered in the main menu, if entered correctly, you will hear a sound. To use the level selection, select Load Game in the main menu - and you will see all the levels and all the bosses, from which you can select with the Right / Left arrows:
‹
›
Home
View web version