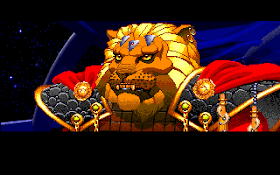 Genre: Action, Simulation
Perspective: 1st-person
Vehicular: Space flight, Vehicular combat
Setting: Sci-fi / futuristic
Published by: ORIGIN Systems
Developed by: ORIGIN Systems
Released: 1991
Platform: DOS
Tiger Claw, the flagship of the Confederate Space Fleet, has been relocated to the Enigma Sector to lead the assault on K'tithrak Mang, Kilrathi's main space base in the Sector. While you and a few other soldiers were patrolling the sector, a wave of Kilrathian stormtroopers suddenly appeared near the Tiger's Claw and destroyed it, and invaders clearly appeared from the sector you were patrolling. And although the enemy ships were noticed by you, they suddenly disappeared into space, not even leaving a record about themselves in the ship's computer.
Admiral Tolwyn didn’t believe your story about the missing ships and accused you of betraying humanity and allowing the Kilrathi ships to destroy the Tiger Claw, and the story of the “invisible ships” was invented as a cover. But since there was not enough evidence of your betrayal, you were only exiled to Kaenarvon Station, the quietest corner of the Enigma Sector, where you could not interfere with the actions of the Confederate forces.
For ten years, you had to patrol almost empty space, only occasionally meeting peaceful merchants. But one day everything will change, and you will have a chance to justify yourself in the eyes of humanity.
Unlike the previous part, the game will delight the improved intelligence of enemies who are now trying to adapt to your fighting style, a wider choice of weapons, even more animation inserts and much more. As in the previous part, the story of fighting Kilrathi is non-linear and directly depends on your skill.
‹
›
Home
View web version