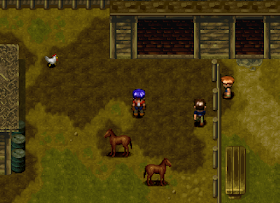 Genre: Role-Playing (RPG)
Perspective: 3rd-person, Top-down
Art: Anime / manga
Pacing: Turn-based
Setting: Fantasy
Published by: Sony Computer Entertainment America Inc.
Developed by: Media.Vision Entertainment Inc.
Released: 1997
Platform: PlayStation (PSX, PS1)
Role-playing game, over time, overgrown with many fans and received more than one sequel, combining wonderful three-dimensional polygonal graphics and a fascinating scenario. A thousand years after the battle with the Metal Demons, the inhabitants of Filgaia are once again forced to fight against their old enemies. The Filgaians have invited three young adventurers to help. Everyone has their own reasons for participating in this war, but the heroes are united by their common goal - to restore the former greatness of the country with the help of the magic Tear Drop, which will save the Queen Demon from a thousand-year sleep. Three of our adventurers are skilled in weapon upgrades, martial arts training and mechanical spellcasting. Each of them obtains weapons and everything they need through complex searches, passing mazes and solving puzzles. Each success of the magnificent trinity is rewarded with treasures, new belongings and remedies for wounds, ailments and diseases.
Excellent graphics match the best role-playing games, especially in battle scenes in which the characters are large and detailed. Seven cameras perfectly pan the action - in this sense, Wild Arms even surpasses the hits released at the same time: Suikoden and Revelations Series: Persona. The sound is excellent, especially the energetic musical accompaniment of fights and battles. The menus are clear and straightforward, the controls are not complicated, but very efficient. On the whole, this is undoubtedly one of the best RPG games of 1997. She will not leave you indifferent!
‹
›
Home
View web version