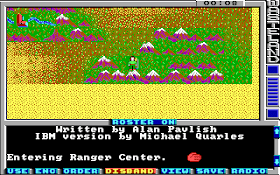 Genre: Role-Playing (RPG)
Perspective: 1st-person, Top-down
Visual: 2D scrolling
Pacing: Turn-based
Setting: Post-apocalyptic
Published by: Electronic Arts
Developed by: Interplay Productions
Released: 1989
Platform: DOS
Year 2087 A.D. The Third World War, which brought with it the massive use of nuclear weapons, turned the world into a radioactive desert, in which rare and small groups of people are fighting for survival. You have to try on the costume of the Desert Ranger, one of the few who took an oath to restore human civilization from the still glowing ashes. But first you need to learn how to just survive.

There are some things that Boy Scouts are not taught. Hand-to-hand combat, handling explosives, shooting from all kinds of weapons - this is only a tenth of the skills that the future savior of civilization will have to master in order not to become a victim of another mutant or a gang of robbers.
The game, unlike most RPGs of the time, uses a top-down view when traveling. During combat, which takes place in turn-based mode, it switches to a first-person view, showing the enemy that your brave Ranger and his squad are facing, as well as a set of actions that you can take. Take your time. The desert does not accept hasty decisions.
There are games that only get better over time. Wasteland is one of them. Classic.
‹
›
Home
View web version