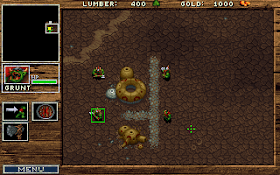 Genre: Strategy / tactics
Perspective: Top-down
Visual: Free-roaming camera
Pacing: Real-time
Gameplay: Real-time strategy
Interface: Multiple units / characters control, Point and select
Setting: Fantasy
Narrative: War
Published by: Blizzard Entertainment Inc.
Developed by: Blizzard Entertainment Inc.
Released: 1994
Platform: DOS
This real-time strategy, which was originally planned as a clone of Dune 2, quickly attracted the attention of the general public and won Blizzard a place of honor on the gaming Olympus.
The plot of the game is straightforward. The human kingdom of Azeroth (Azeroth) expands its possessions and runs into orcs - a slightly less intelligent race, which compensates for this lack of increased aggressiveness. A bloody war breaks out, and it's up to you who wins this conflict. 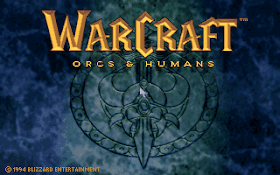 As you might guess, you can play as humans or orcs. Twelve tasks are presented for each side. There are no special differences between the sides, with the exception of the appearance of units and buildings, as well as spells that are used by the mages and priests of both sides.
Buildings are built by special units - peasants. A peasant can erect a new structure only near the road (which is being laid by the same unfortunate workers with shovels and picks) and other buildings. Aspect, on the one hand, complicates the gameplay, but on the other hand, makes it a little more realistic.
Another interesting feature of WarCraft's gameplay compared to Dune 2 is the ability to upgrade (read: upgrade, from the word upgrade) units. Warriors get the best armor and weapons, and mages learn new spells that they use in battle, spending regenerated mana on it.
All this requires resources, which are represented in WarCraft by wood and gold. Both resources are mined by the same peasants. The third resource is food, and you can increase its amount by building additional farms, each of which provides a limited number of units with food.
Well, the rest of the gameplay is interesting, but uncomplicated. We rebuild, reflect the enemy's raids, carry out the mission (most often - the total destruction of the opponent). Less often (two missions for each side) there are tasks in which you have to make your way through the dungeons, having only a limited number of soldiers.
There is another, at first glance, insignificant reason to praise Blizzard - multiplayer. I don't think it's worth explaining how much more enjoyable it is to play a good strategy with a live opponent, and not with a computer, which can be so easy to defeat, even if it has a numerical advantage at first.
A classic of the genre that is simply impossible to miss. Although why am I saying this? I think that you already understand everything.
‹
›
Home
View web version