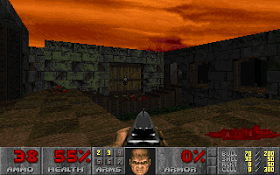 Genre: Action, FPS
Perspective: 1st-person
Gameplay: Shooter
Interface: Direct control
Setting: Sci-fi / futuristic
Narrative: Horror
Published by: id Software
Developed by: id Software
Released: 1995
Platform: DOS
The add-on to the game Doom includes a new episode of Thy Flesh Consumed, containing, as in the game's original episodes, 9 levels, of which one is secret. It was published some time after Doom 2. All the names of the levels of the new episode, like itself, are written in Old English and are taken from the Bible (translation of the King James Bible). Owners of the licensed version of Doom could get Ultimate Doom for free with a free patch.

Since at the time of the creation of the game, id Software was already busy with the development of Quake at an early stage and other projects, the developers did not pay special attention to the plot of the new episode and its connection to previous episodes, the main emphasis was on the direct gameplay of the shooter. 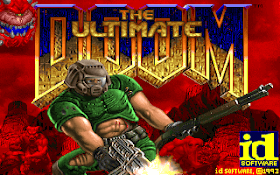 The Doom engine has been slightly modified to include some elements of Doom 2, such as the ability to use at the level of blinking lights and fast doors. A bug with the Lost Soul monster, which behaved incorrectly when hitting the floor and ceiling, was also fixed. At the same time, the version number was left the same as 1.9, which subsequently led to confusion, especially with playing demos of the game made on the version 1.9 Doom engine.
In previous episodes of classic Doom, the first level of the first episode of Knee-Deep in the Dead was modified. This level was one of the most popular for multiplayer deathmatch, and John Romero felt it necessary to slightly change it in order to improve the playability of multiplayer games on it.
‹
›
Home
View web version