The Legend of Kyrandia: Book One (DOS) 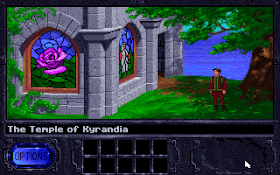 Genre: Adventure
Perspective: 3rd-person
Gameplay: Graphic adventure, Puzzle elements
Interface: Point and select
Setting: Fantasy
Published by: Virgin Games
Developed by: Westwood Studios
Released: 1992
Platform: DOS
It is unlikely that some of you have not heard about the magical land of Kyrandia and have never dreamed of visiting this small but so cozy kingdom at least once. True, as in all kingdoms in the world, here, too, not everything is calm and misfortunes are pouring in one after another. The source of all trouble is the foolish jester Malcolm, but don't be fooled by his smart jester costume - his antics are not at all harmless and sincerely amuse only him. Trouble came to the kingdom - people disappear and turn to stone, and even nature itself froze in anxious anticipation. It's time to go on the road, putting simple belongings in a backpack - they will come in handy, the path is not short. Oh yes, I forgot to introduce you - Brandon, Kallak's grandson, together with him you will have to fix what the jester has done, and at the same time try to avoid the dangers that the journey has prepared in sufficient quantities. 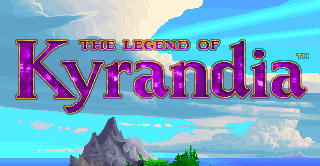 Take a look around: here, in the first part of the game, you can fully enjoy the views of Kirandia with its emerald glades, steep cliffs, ancient altars and caves lost in the depths of the cool forests, and also get acquainted with some very unusual inhabitants of the magical world. Kind-hearted Brandon will never leave a bird with a broken wing in trouble, will not pass indifferently past a withered tree, an empty well. And the inhabitants of the kingdom, and even inanimate nature, will gladly thank and reward their savior. You will also have to take an accelerated course of Kyrandian witchcraft for beginners, because this is an unusual world - here every subject is fraught with a piece of magic.
That the journey will not be without surprises will become clear as Brandon steps into the dark caverns in the cliff in pursuit of Malcolm. No map for you, no compass ... Darkness and a hundred and one ways to die. In quests (and not only) of that time, this was periodically encountered, when the developers left drawing maps and enumerating the necessary directions of movement on the conscience of the player. And it should be noted that the imposed necessity of passing the labyrinth in the rock scared off some and forced others, more stubborn researchers of the drawn world, to draw a large-scale map on paper, dreaming of getting to the longed-for exit.
But, finding yourself on the outskirts of the forest, so unusually bright after the gloomy vaults of the caves, you can breathe a sigh of relief with Brandon: "Finally, fresh air." And patience will be rewarded, believe me, because the adventure is not over yet. And where does it say that the saviors of the kingdom do not face difficulties in wandering?
Legend of Kyrandia is a recognized classics of its genre, this world and the simple but catchy music that accompanies you throughout your journey is simply impossible not to fall in love with. I could tell a lot more about this amazing country, but it's better to see once than .. But you know that yourself, right?
‹
›
Home
View web version