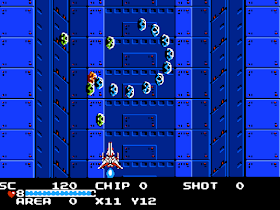 Genre: Action
Perspective: Top-down
Gameplay: Shooter
Setting: Sci-fi / futuristic
Published by: Broderbund Software
Developed by: Compile
Released: 1989
Platform: Nintendo (NES)
Many years ago, an enemy race from a distant galaxy sent a huge Naju complex to Earth, filled with a dangerous load of mysterious life forms. However, deep in the depths of this complex there are self-destruction mechanisms, activating which, it is possible to destroy this dangerous object before it reaches the Earth and destroys all life on it. We, playing as the main character of the Guardian game (Guardian, a cyborg girl who can transform into a spaceship), are called upon to enter the labyrinths of Naju and complete this difficult mission.
The game's plot is told through a series of messages left by one or more unknown predecessors who tried unsuccessfully to complete the same mission. The first message left by the lone survivor of the attack on Naju serves as an introduction to the game, subsequent messages give us clues related to the closed corridors.
"Guardian Legend, The" is an explosive mixture of action (Dungeon mode) and RPG (Labyrinth mode), and the game is a wonderful combination of elements of the two genres, coupled with a good storyline and great gameplay. The game combines both flying through the Corridors and wandering in the depths of a huge complex with puzzles and a gradual build-up of character characteristics. Finding new weapons, bosses, mazes and puzzles are all well balanced and definitely addictive. Keeper controls are easy, intuitive and non-annoying.
The game is graphically superb. The colors are vibrant, the details are crisp and the characters are well animated. The graphics are varied - each zone has its own personality. Despite all the graphic refinements, the game does not slow down at all - the dynamics remains even if there are a lot of sprites on the screen, and the background flickers at the speed of light. In general, graphically "Guardian Legend, The" squeezes out of the 8-bit "Nintendo" console almost everything it can do.
Music is generally a separate conversation. Original and very beautiful melodies sink into the soul for a long time, creating a unique atmosphere of the world of Naju. It should be noted that the soundtrack for the game is one of the best among the Famicom / NES games.
"Guardian Legend, The" is a really difficult game, quite long and varied. In order to complete it, it will take more than one hour, but, believe me, the time spent is worth it. After passing, you can return to it more than once, constantly finding something new and unknown. The game is much deeper than meets the eye. It is a pity that the acquaintance of many players with it ended in due time at the initial stage.
‹
›
Home
View web version